NW Rota-1 submarine volcano is truly unique because it is the only place on Earth where deep submarine volcanic eruptions have been directly observed. In addition, we are discovering that the volcano seems to be continuously active, which is very unusual even for volcanoes on land. What this means is that NW Rota-1 is a fantastic natural laboratory for learning about underwater eruptions, how submarine volcanoes grow, and how they affect the ocean environment.

One aspect of working here that continually amazes me is how close we can get to the eruptive vent, because the pressure of the ocean above keeps the energy of the eruptions subdued and allows us to have a great view of what is happening in the vent.Some of the most exciting observations we made during this expedition were during the times that we were watching lava slowly get pushed up and out of the eruptive vent. As this was happening, the ground in front of us shuddered and quaked and huge blocks were bulldozed out of the way to make room for new lava emerging from the vent. It gave me the distinct impression that there was some powerful monster just below the seafloor trying to get out.The eruptive activity here is extremely dynamic because there is so much gas being released from the lava as it comes out.

We also discovered that the volcano has grown considerably since our last visit in 2006. The eruptive vent is now at the top of a large cone that a new bathymetric survey shows is as high as a 10 story building and as wide as a city block. And that entire cone was not there in 2006! Despite the on-going eruption with ash and rocks falling everywhere and an extreme chemical environment, an ecosystem has developed here that is thriving. In fact, we found this year that the population of animals and microbes had increased dramatically relative to 2006 and had become more diverse, including new species that have not been found anywhere else. Do the animal populations wax and wane in concert with the intensity of the eruptive activity at the vent? Our work is aimed at investigating if such interactions exist between the volcano and the animals that live here.
We will be leaving an array of monitoring instruments to learn more about how the volcano behaves over the next year. A hydrophone will record the sounds of the eruptive activity, chemical sensors will sample the eruptive plume above the summit, and moorings on the flanks will look for landslides and debris flows from the eruptive vent. We plan to be back here next year to continue our investigations at this fascinating place where we have the rare opportunity to study a submarine volcano in action.

In closing, I would like to thank the National Science Foundation for supporting our research here at NW Rota-1. The success of our expedition this year is in large part due to the hard work of the talented team of Jason pilots and engineers who kept the ROV running in top form and allowed our dives to be as productive as possible. We also had outstanding support from the captain and crew of the research vessel Thompson, who are always a pleasure to work with. Finally, I would like to thank my colleagues who have joined me on this trip. It is always a pleasure to go to sea with a diverse group of specialists (geologists, chemists, ecologists, microbiologists, oceanographers) because it expands the scope of what we can learn and accomplish and it allows us to look for linkages between all of our observations and experiments. I can’t wait to see what the volcano is up to next year.

Below are some video highlights from this year's expedition: 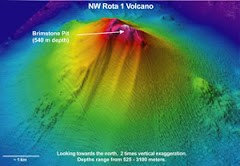 3D view of the volcano 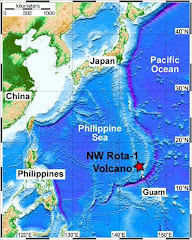 NW Rota-1 volcano is located 37 miles (64 km) NW of the island of Rota and 60 miles (100 km) north of Guam. The volcano lies along the Mariana Volcanic Arc, a chain of active volcanoes associated with subduction along the Mariana trench. For more information on the Mariana Arc: click here.